The Drowsy Chaperone, VOB’s 2012-2013 mainstage, was its most successful mainstage production yet. The production featured over 40 student performers, a student orchestra, and an all-student creative an technical team. Set in the apartment of an agoraphobic musical theatre fan, the show–in its sly tribute to the musicals of the 1920s–explores and celebrates the magic of theatre. 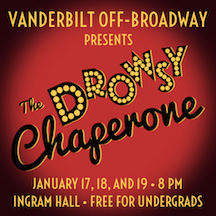