Spring Awakening, the alt-rock musical based on Frank Wedekind’s groundbreaking 1891 play, set a new high watermark for VOB as a group. Set in a small German town at the turn of the 20th century, Spring Awakening lays bare the frustration, angst, and sexual awakening of its adolescent characters with a modern edge. 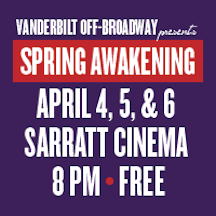