Bloody Bloody Andrew Jackson, a satirical musical that reimagines our 7th president as an emo rockstar, was met with rave reviews across campus. This hilarious and irreverent rock musical entranced students and faculty alike with its catchy music, angsty ballad, and an endless supply of laughter (and Twinkies).

To see some images from VOB’s production, click here! 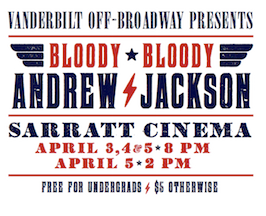