Described affectionately as the show where “Sesame Street meets South Park”, VOB’s 2016 second show was Avenue Q. The show follows the life of recent college-graduate Princeton, as he moves into a New York City apartment all the way on Avenue Q. As he meets several of his neighbors and fellow Avenue Q residents, he begins to realize that he has chose to live in a very unique neighborhood.

VOB’s productions of Avenue Q was a huge hit with audiences, nearly selling out Sarratt Cinema for each performance. The cast and crew put together a hilarious production that had audience members laughing long after the final bow.

To see some pictures from the show, click here! 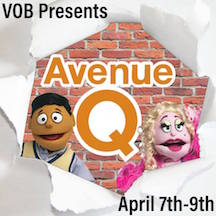