Pollinator/Native Species Garden – Converting the circular garden space by Furman Hall into a pollinator garden as well as planting fruiting trees across the campus. The pollinator garden was proposed to contain a variety of perennial pollinator plants that are native to the Tennessee/Nashville Area.

Nest Thermostats – Implementation of Nest thermostats or other smart energy demand programs for the Office of Admissions building and the Peabody Administration building. Leads to lower carbon output and energy savings. 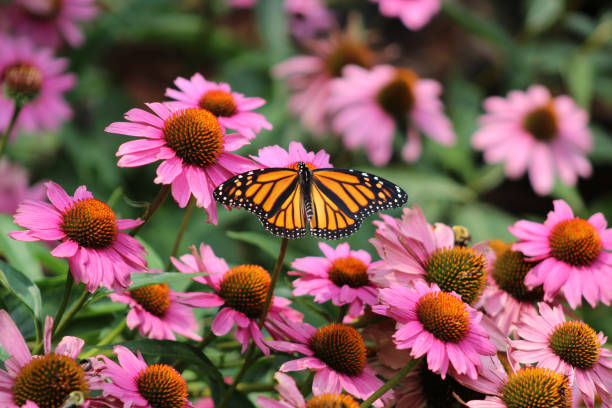 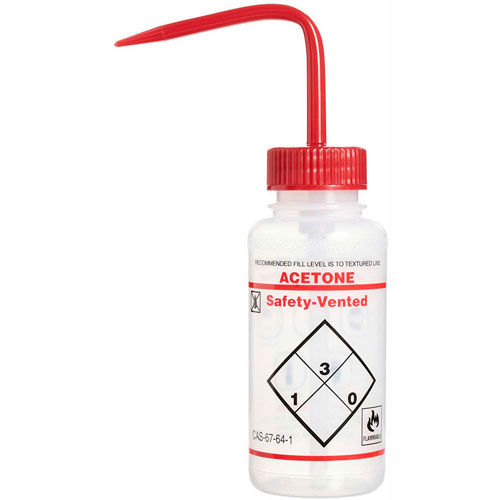 Motion Sensors in Blair – Motion sensors on lights would greatly reduce the amount of time that lights are left on in vacant practice rooms. Blair’s energy usage is often overlooked when compared to the more common areas of energy use such as laboratories or dining halls on a college campus. This project ensures that Blair grows its own awareness and responsibility regarding campus-wide energy consumption

Greek Row Aluminum Recycling – The improper disposal of aluminum cans is wasteful and unnecessary because aluminum cans have the unique ability to be endlessly recycled. By increasing the recycling of aluminum cans on Greek Row, Vanderbilt can substantially decrease greenhouse gas emissions and pollution caused by the generation of new aluminum can material.

Publicizing Energy Consumption – The project would be to publicly display how much energy is being used for each building on campus in terms of natural gas, electricity, and other metrics that are easily understood by the student body. This would require a partnership with a student organization, such as SPEAR or Change++, that will take the lead in visualizing Vanderbilt’s energy usage. 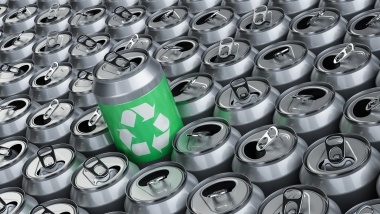 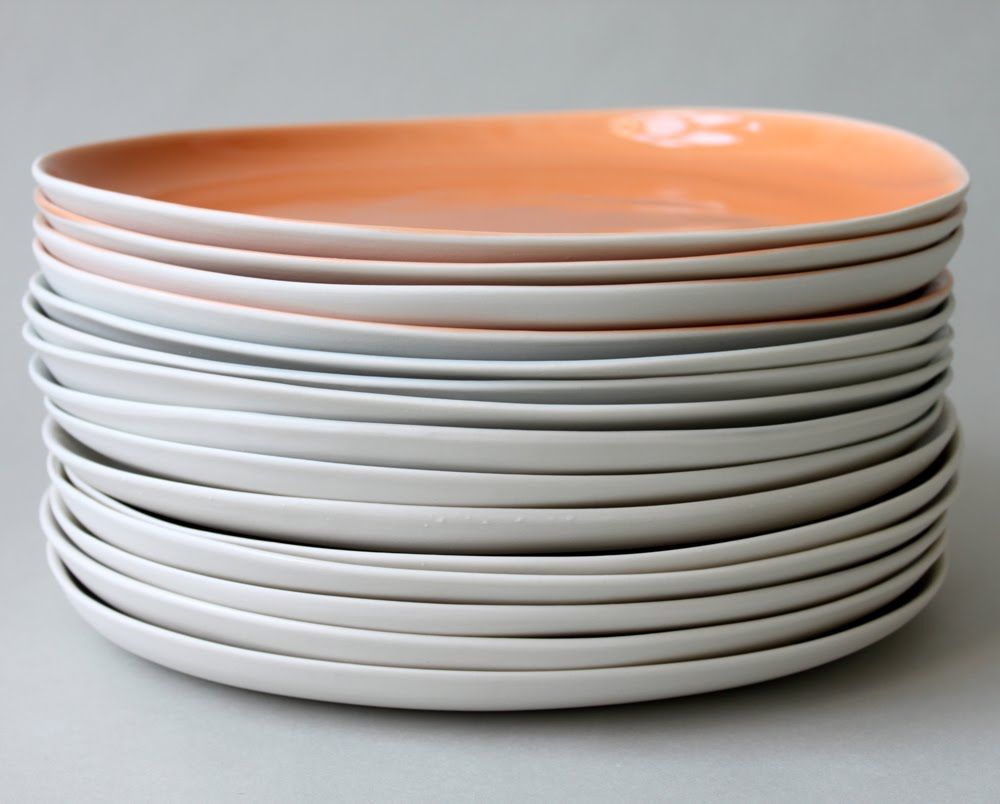 Commons Composting – This project will allow for willing and passionate students to receive a
small kitchen composting bin with compostable bags for their rooms. The environmental impact of this will include both the direct impact
from keeping food waste & compostable materials out of the trash along with the indirect impact
of educating young college students on leading a sustainable life.

Reusable Plates Project – This project aims to provide reusable plates and cutlery along with washing and storing of said dishware for student organizations that routinely provide food for their clubs. Over 30 weeks, this totals to about 1,800 plates being saved from landfills.

Xeriscaping – Xeriscape a lawn on the campus, i.e replace the lawn with plants such as
wildflowers that require less work and water to maintain and place a sign in front of the lawn that
educates the reader about the environmental and cost benefits of Xeriscaping. We could save between 12,000 – 47,000 gallons of water a year.

Energy Saving in Academic Buildings – A proposal for automatic lights in many academic buildings that leave their lights on all throughout the night. This saved the university money and energy by reducing the time lights are left on while unused.

Switch to Napkin and Silverware Dispensers – Cut down on waste by installing dispensers for napkins and silverware in dining areas. This would ensure students only take and throw away the utinsels they need, reducing excess waste and spending. 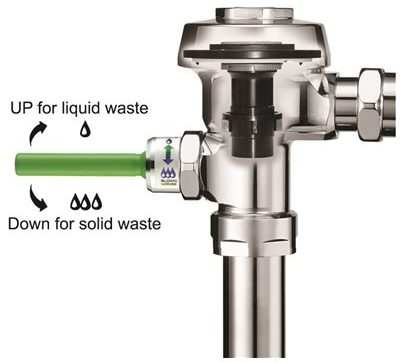 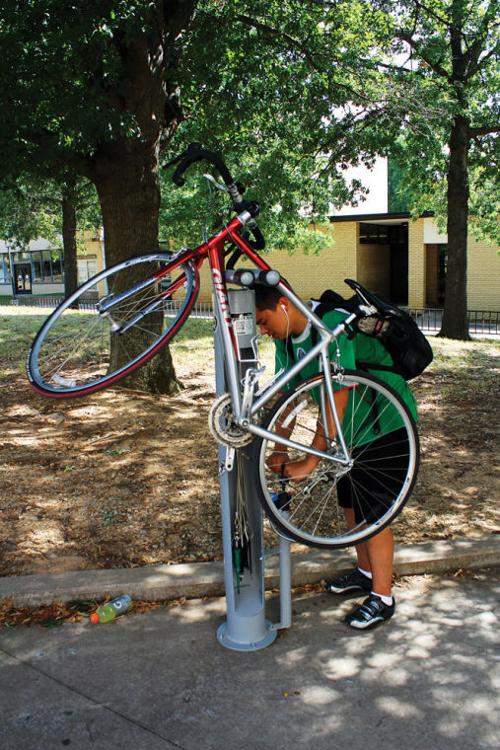 Bike Repair Station – Students who use bicycles often lack the tools necessary to maintain them, from a simple tire. pump to an Allen wrench. Ensuring access to these tools can be achieved by placing a repair station near residential building bicycle racks, where students can service them without needing to take a trip to a bicycle shop off campus.  This will incentivize cycling as a convenient mode of transport by eliminating a significant portion of maintenance costs. People switching to cycling will reduce emissions from vehicular traffic on Vanderbilt’s campus and surrounding neighborhoods.

Aquaponic System – create a self-renewing, sustainable, water conserving, gardening and pisciculture system that
will increase farming efficiency in the Vanderbilt Community Garden while providing an
educational opportunity to members of our community.

Multicultural Garden – Develop a space in our garden for members of various backgrounds to share botanical knowledge (and possibly even cuisine based on what they produce!). Reach out to multicultural orgs as well as language departments to join our community and contribute to this space.

Solar Evacuated Heating Tubes – $25,000, Solar hot water heaters will be added alongside the solar panels on the roof of Currey Tennis Center. 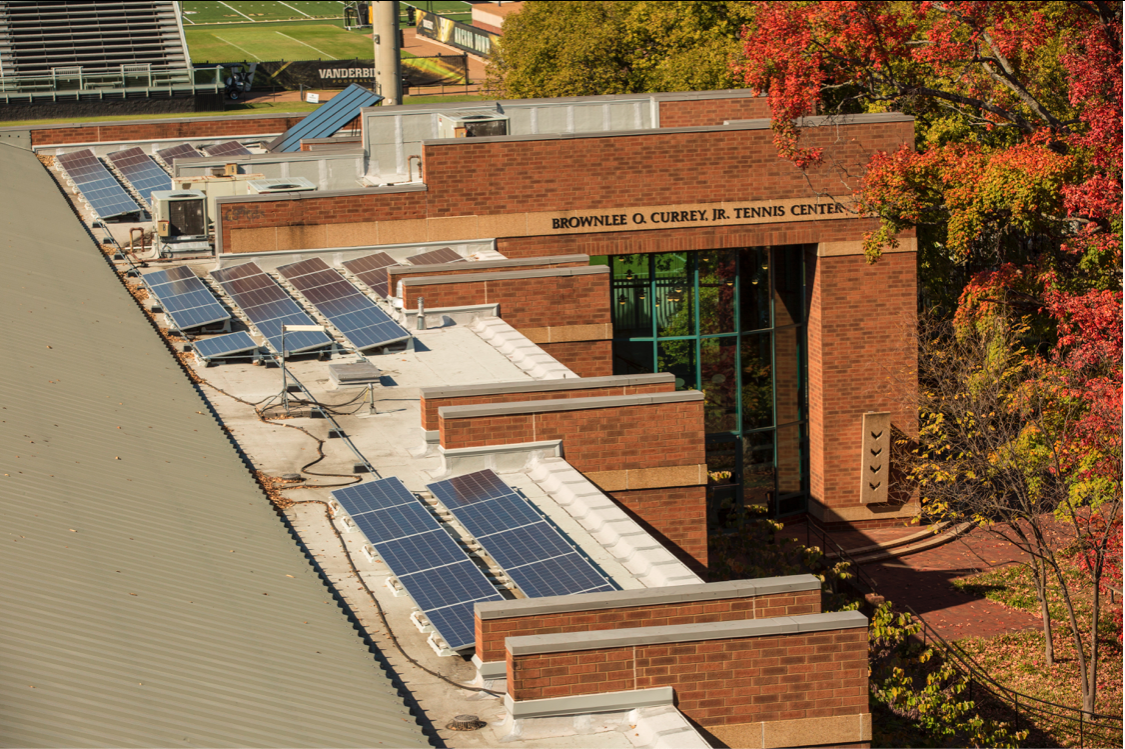 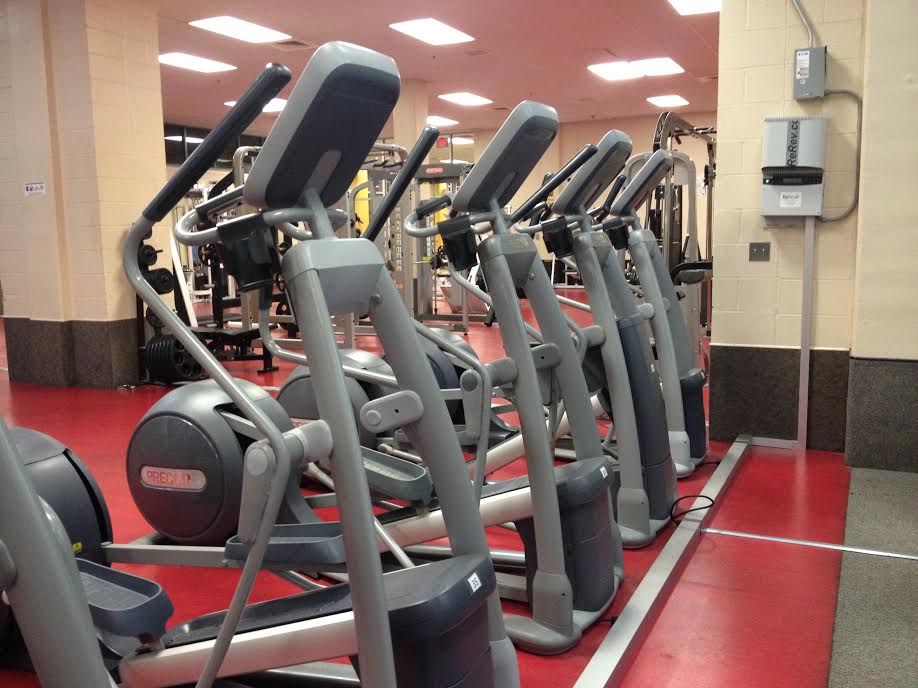 ReCardio – ReCardio collects energy from people using workout equipment (such as ellipticals) and puts it back into the grid. These have been installed at the Student Recreation Center.

Revolving Doors – Revolving doors help reduce energy use for heating or cooling a building. The proposal was for four revolving doors around campus, but due to installation and ADA issues, the funding would only cover one door. This door was slated for entrance at the Sarratt Cinema Gallery, but no agreement could be reached between Campus Planning, the Dean of Students, and others involved so money has not been spent to date (Spring 2016).

EcoTube/EcoTank – An original invention by a Vanderbilt student, Param Jaggi, was to put money into studying a carbon capture device on exhaust pipes of vehicles. However, as of March 2015, Param Jaggi had withdrawn from Vanderbilt University, so funding could not be allocated to his project. Therefore, the money was put into implementation of hydration stations.

KEFI Recyclasaurus – This project was a collaboration between KEFI and Vanderbilt Green Fund to raise awareness about recycling on campus. The Green Fund allocated money to help KEFI build a 15 foot tall metal-mesh dinosaur in front of Branscomb Quad during March 2015. There were openings to toss aluminum cans into the dinosaur, which gradually filled up and raised awareness of recycling on Greek Row.

High Performance Showers – High performance, low-flow showerheads were retrofitted to 820 existing showerheads throughout residential houses on campus over summer 2013. This retrofit is projected to save 28.5 million gallons of water each year on Vanderbilt campus.

Green Lights – Eleven flat-screen computer displays were installed in the lobbies of the 10 Commons Houses (two in Hank House) to project real-time energy usage of each building in comparison to a pre-set savings goal. A custom interface was designed that uses colored smiley faces to quickly communicate whether the building was meeting its pre-set savings goal at any given time or not. Energy savings have been incorporated into the Commons House Cup competition.

Solar Evacuated Heating Tubes – The project was originally designed for the McGugin renovation, but complications arose. Therefore, funds have not yet been allocated but the focus is now on solar powered systems for the Currey Tennis Center (see Proposals 2015).

Occupancy Sensors in Common Areas – Fifty occupancy sensors for lighting were installed throughout common areas such as bathrooms and kitchen in Towers. 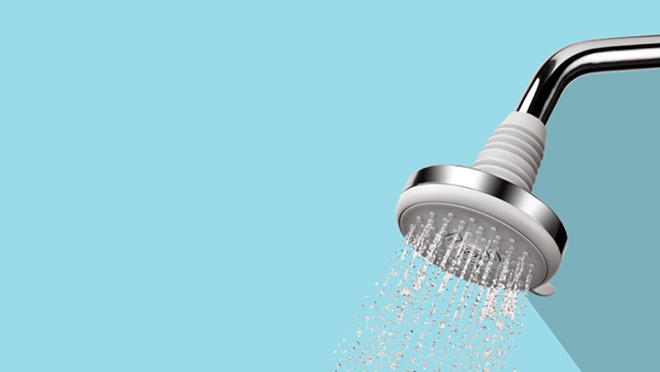 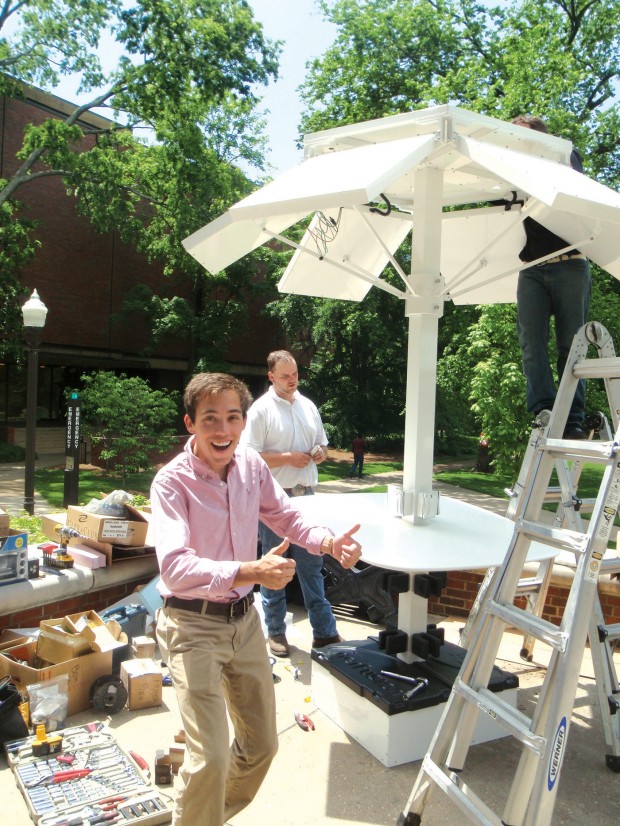 (Original award: Hybrid Power System for Green Vandy Van route) Final award: Upgraded Lighting in Divinity School – Conversion of existing Vandy Van to hybrid vehicle and branding of “green Vandy Van route”. No legwork was done to find out that Vandy no longer owns the Vandy Vans, they are rentals.  Thus, project funding was then awarded to upgrade Divinity lighting and add automated controls. Completed in 2013.

Biogas Digestion System Research (failed) – Proposal was for anaerobic digestion system that would use food scraps from dining halls to produce methane that could then be used for fueling cooking systems in the Commons Dining Hall. This project was never implemented on campus due to safety issues but some money was expended for equipment before project was shut down. However, today Vanderbilt Dining is actively using an ORCA machine to recycle food waste.

Green Showers – Pilot water conservation program in Ingram, Murray and Stambaugh Houses that included installing timers in showers.  Surveys showed timers reduced shower time, but timers continually fell off and were misplaced. Timers were taken out due to many complaints from students. 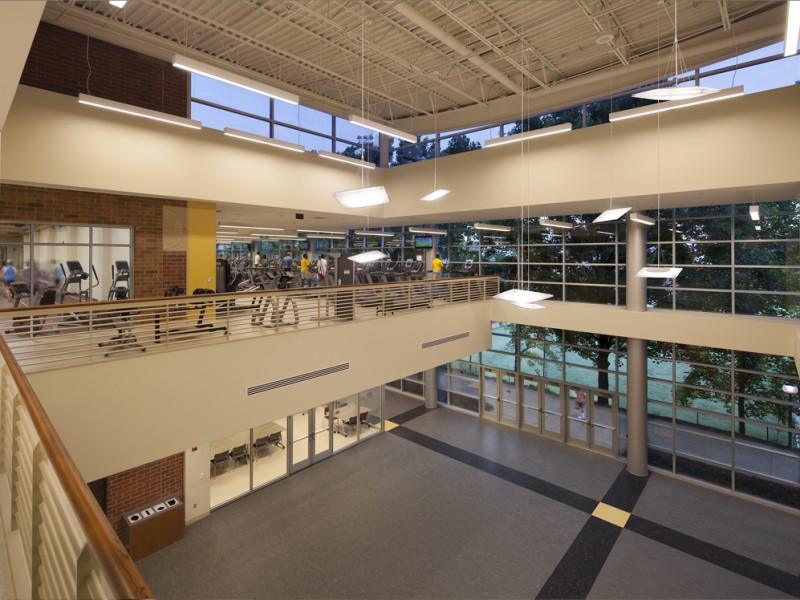